July 6th, 1993 marks the release of «Gods of War», the second full-length recorded by the Canadian cult. But if the spirits of the desecrated sepulchres had been haunting the band thus far, the coming disaster would be even worse...

The year was 1991. The fondness of BLASPHEMY members for iron-pumping and weight-lifting was well known in underground metal and Marco «Sodomizer», being the polymathe he is, quits the band to focus on his body-building activities, his career on radio and his work as a session musician. This is when Black Priest briefly returns to the ranks of the band and Black Winds leaves the four-strings to take over the vocal duties. 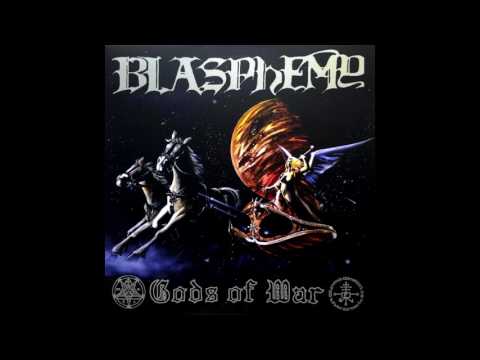 The bass had been wielded on more than one occasion by Kelly “Bestial Savior” but, since he was entirely devoted to his main band TUMULT, the horde received the services of one Darren, better known for his stage name «Ace Gustapo Necrosleezer and Vaginal Commands». During this time, the songwriting was mainly done by Black Winds and the band started looking for a new label. After being routinely rejected by several labels, BLASPHEMY gets in contact with Hervé, owner of the recently formed and rapidly reputed Osmose Productions. Hervé had signed then-emerging but firmly established acts such IMMORTAL, MARDUK and IMPALED NAZARENE. Hervé quickly offers the band a deal sending them US $5.000 as recording budget for a new album. Between September and December 1992 BLASPHEMY locked themselves up to record «Gods of War», once again in their winter headquarters at Fiasco Brothers Studios.

The album would included re-recorded version of the songs ‘Blasphemous Attack’, ‘War Command’, ‘Blasphemy’ and ‘Nocturnal Slayer’ (previously available in their demo), plus new the songs ‘Atomic Nuclear Desolation’, ‘Emperor of the Black Abyss’, ‘Blood Upon the Altar’ and the title track, composed by Marco “Sodomizer”. The band also recorded the song ‘Necrosadist’, which was part of the band’s set list since 1989 but had not been recorded yet.

Once the recording process was finished, however, the final material was not enough for a full-length; since the total running time for the new songs was around 20 minutes long, BLASPHEMY opted to add a remixed version of their «Blood Upon the Altar» demo songs as bonus tracks. This decision would not have the desired results, though.

As part of their promotional activities, BLASPHEMY did the «Gods of War» tour; this first incursion on European soil saw the band playing 23 dates in the Norhern-Western part of the Old Continent alongside their Canadian countrymen GORGUTS… an odd combination even for the time. Apparently, the first option for this tour was IMMORTAL but it seems that someone (the booking agency, perhaps?) thought that having two bands of two different subgenres would attract more people to the shows and GORGUTS was available.

From March 26th and April 20th, 1993, BLASPHEMY crushed the minds and corrupted the souls of those who attended their gigs in Germany, Denmark, Sweden, the Netherlands, Belgium, France and the United Kingdom. However, things started going downhill almost since the moment the band put their feet on European ground. The looming disaster was near.

When getting off the plane and picking up their luggage, the band noticed that «Ace Gustapo» had left the one with their spikes, chains, nails, bullet-belts, hand-grenades. pyro and all the especial leather clothing the band was (is) famous for during their shows. Tensions began inside the BLASPHEMY camp, and the issues Black Winds had back at that time with drug-abuse made matters even worse. The situation became unbearable and the first five tour dates were enough for things to finally explode… and it all happened after the tour date at Juz in Leonberg, Germany and between March 31st when the band performed at the Jukebox in Nordköping, Sweden, and the 1st of April, 1993, their show at Barbue in Copenhagen, Denmark.

It is not clear what happened, even to this day; some say it was a fight or another similar incident, while others say it was a drug-related issue. The fact is that when the band performed in Denmark the 1st of April, 1993, BLASPHEMY did their show as a trio. According to some interviews done at the time and over the years, Black Winds tries to go on with the tour but, when BLASPHEMY got into the Netherlands, Black Winds was definitely out of the band.

In the face of adversity, and until the end of the tour, Ace Gustapo» assumes the lead vocals. And as for Black Winds, according to some interviews given by band members over the years, it seems that returning to Canada was not an option for him at that time. It appears that some legal actions concerning the accusations of grave / corpse desecration and vandalism charges had been taken in Canada during that time and Black Winds decided to keep things quiet and remained living in Copenhagen, Denmark, for the next couple of years, where he cleared his mind and cleaned his body. But the BLASPHEMY seemed to be endless…

«Gods of War» was finally released on July 6th, 1993. The original cover artwork —red logo, black background and white-lined drawing— made by a member of the Canadian band BLACK PENTAGRAM CULT was altered by Osmose…

…and the final artwork was commited by Osmose to the Canadian graphic artist SV Bell (Sylvain Bellemare), author of cover artworks for albums such as IMPALED NAZARENE’s «Tol Cormpt Norz Norz Norz» and, later, would do the artwork for ROTTING CHRIST’s «Thy Mighty Contract» (both albums released by Osmose).

Sylvain Bellemare – «Gods of War». Original painting for Osmose’s release. [Photo from the artist’s personal archive, published on his blog].

The album had no lyric sheet: according to Osmose, it was done that way because the artist had requested so… but, to this day, the band says they have no idea what happened. If this were not enough, the band sent Osmose «the wrong master tape» (?): the «Blood Upon the Altar» demo was included as «bonus material» on the «Gods of War» album but, instead of having them as one long, single track (akin to what IMPALED NAZARENE did with their «Taog eht fo thao ent» demo on later «Tol Cormpt…» versions) all songs were separated from each other (something the band did not intend).

Despite all these inconvenients, BLASPHEMY embarks on their second European expedition. Done between the 15th and 29th of December, 1993 with their label mates IMMORTAL ROTTING CHRIST it was known as the Fuck Christ Tour». Right before the tour started, and to «keep in line» with their fellow satanis skindead bandmates, Ace Gustapo shaves his head. For this tour, BLASPHEMY takes the services of Aaron «Festering Arsonist» from the Canadian band ANTICHRIST, who performs with the band on guitar duties, thus giving the band a tighter live sound. The «Fuck Christ Tour» was a complete success.

BLASPHEMY on the «Fuck Christ Tour». From left to right, Caller of the Storms, Black Hearts, Ace Gustapo & The Festering Arsonist. [Photo taken from the Nuclear War Now! forum]

Back in Canada, Black Hearts is arrested right after he got off the plane, for unproper behavior and other incidents during the flight. He is released shortly afterwards, and BLASPHEMY plays a few gigs in their country, playing for the last time on February 26th, 1994 with fellow conspirators ANTICHRIST.

Black Hearts went behind the bars once again a few weeks later, this time for several years ofr physically assaulting a police officer, among other things. With Black Hearts in prison and Black Winds «confined» in Fortress Europa, nothing is known about BLASPHEMY… until a canadian war conqueror and a necromancer of japanese asendant summoned the band on a fearless night ritual… but that is a story for our next issue.